The Alpha of Deadly Heresy, Our Religion Changed

At the beginning of the 1900s, some events took place which were destined to change the very nature of the SDA Church. What were the issues? How has the religion been changed? What did the church used to teach, and what does it teach now?

This change began to take place with the introduction of speculation on the personality and presence of God by the denomination’s leading physician, Dr. J.H. Kellogg. Ellen G. White, a servant of the Lord, warned that these ideas which had been set forth in the Doctor’s book entitled “Living Temple, were “akin to pantheism. Shockingly, there are doctrines accepted in orthodox Christian circles that speculate on where God’s presence is, and in doing so, destroy the personality of God.

Ellen White, called this speculation on the personality and the presence of God, the Alpha of deadly heresies, and said the Omega would follow shortly. When we say one knows the subject from A to Z (opposite of knowing only the ABC’s of something) we mean that he knows A to Z and everything in between. We mean that he knows the subject thoroughly. The Alpha and Omega of heresy (false doctrine) is every false doctrine. The Alpha is the foundation of false doctrine, the Alpha and Omega would include everything that is built on that foundation.

Ellen White spoke of a heresy, which was coming into the Seventh-Day Adventist Church at the turn of the 20th century, and warned that it was but the “alpha” and she spoke of the “omega”, which was to follow.


Special Testimonies series b No. 2 - 50.2
"I am instructed to speak plainly. "Meet it," is the word spoken to me. "Meet it firmly, and without delay." But it is not to be met by our taking our working forces from the field to investigate doctrines and points of difference. We have no such investigation to make. In the book "Living Temple" there is presented the alpha of deadly heresies. The omega will follow, and will be received by those who are not willing to heed the warning God has given."

III. The Issue – The Personality and Presence of God

"Finally my son said to me, "Mother, you ought to read at least some parts of the book, that you may see whether they are in harmony with the light that God has given you." He sat down beside me, and together we read the preface, and most of the first chapter, and also paragraphs in other chapters. As we read, I recognized the very sentiments against which I had been bidden to speak in warning during the early days of my public labors. When I first left the State of Maine, it was to go through Vermont and Massachusetts, to bear a testimony against these sentiments. "Living Temple" contains the alpha of these theories. I knew that the omega would follow in a little while; and I trembled for our people. I knew that I must warn our brethren and sisters not to enter into controversy over the presence and personality of God. The statements made in "Living Temple" in regard to this point are incorrect. The scripture used to substantiate the doctrine there set forth, is scripture misapplied."

Neither have I attempted a careful research of Dr. Kellogg's theories, nor have I read his books. I only did what Ellen White did recorded in the above statement. I browsed through his books. In this study, I have brought to light some of the error of Dr. Kellogg's teachings. I would not have given such publicity to error had it not been for one fact: Protestants and even modern Seventh Day Adventism teaches and preaches the very same sentiments and even in almost the exact same wording as Dr. Kellogg. We would recoil from the word pantheism, but, without realizing it, we are led to similar conclusions under the guise of "Trinity", or a misinterpretation of the "Godhead", or "heavenly trio". In fact Dr. Kellogg, as we shall see, also rejected that term Pantheism. He was a believer in the trinity. I have quoted some of Dr. Kellogg's statements, since we use some of the very same reasoning, not realizing that it is spiritualism and lays the groundwork for pantheism.

I will here quote J.N. Loughborough

"Man's Present Condition –1855 Chapter title – “IS GOD A PERSON?” (pages 25-34) by J.N. Loughborough
Whatever may be the truth in this matter, it certainly cannot be wrong for us to examine what the Word says respecting it. Many there are that would refrain from the investigation of unpopular truths because the cry of heresy is raised against them. We shall not consider ourselves subjects of the appellation, neither are we prying into the secrets of the Almighty, as we pursue the investigation of this matter. The Bible certainly contains testimony upon this point, and we again repeat, "Things which are revealed belong to us." We inquire then, What saith the Scripture?"


Note: The fact that we are not to enter into controversy over the presence and personality of God, is not a prohibition of speaking against these false sentiments regarding the presence and personality of God found in Living Temple. Ellen White herself bore a testimony against the error, recorded in the above statement, and stated she was compelled by the Spirit of the Lord to do so, recorded in the statement below. 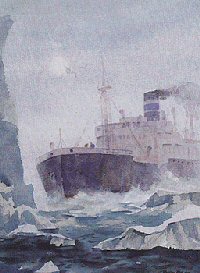 Special Testimonies series b No. 2 - 55-56
"I hesitated and delayed about the sending out of that which the Spirit of the Lord impelled me to write. I did not want to be compelled to present the misleading influence of these sophistries. But in the providence of God, the errors that have been coming in must be met.
Shortly before I sent out the testimonies regarding the efforts of the enemy to undermine the foundation of our faith through the dissemination of seductive theories, I had read an incident about a ship in a fog meeting an iceberg. For several nights I slept but little. I seemed to be bowed down as a cart beneath sheaves. One night a scene was clearly presented before me. A vessel was upon the waters, in a heavy fog. Suddenly the lookout cried, "Iceberg just ahead!" There, towering high above the ship, was a gigantic iceberg. An authoritative voice cried out, "Meet it!" There was not a moment's hesitation. It was a time for instant action. The engineer put on full steam, and the man at the wheel steered the ship straight into the iceberg. With a crash she struck the ice. There was a fearful shock, and the iceberg broke into many pieces, falling with a noise like thunder to the deck. The passengers were violently shaken by the force of the collision, but no lives were lost. The vessel was injured, but not beyond repair. She rebounded from the contact, trembling from stem to stern, like a living creature. Then she moved forward on her way.
Well I knew the meaning of this representation. I had my orders. I had heard the words, like a voice from our Captain, "Meet it!" I knew what my duty was, and that there was not a moment to lose. The time for decided action had come. I must without delay obey the command, "Meet it!"


The truth concerning the personality and presence of God is a fundamental Seventh-day Adventist doctrine if not the most fundamental. It is the very foundation of Christianity. We will examine the teaching and the importance placed upon it by early Adventists.

A. The Personality of God in the Teachings of Early Adventists